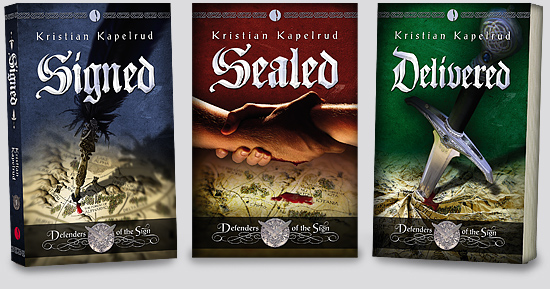 In the fantasy world of Alphabetania a shocking truth is revealed to the people. They are written! They are, essentially, words and letters. How are they to live, now that they know this?

In another reality, the young author Louis Mackenzie is following the conflict in Alphabetania with an eagle eye. The trilogy is the beginning, middle and the end of his long life as an author.

The Defenders of the Sign trilogy is an exciting and unique series of stories about faithfulness, treachery, courage, and of love that crosses national boundaries.

"An amazing story from an amazing writer.

Buy the books from Amazon here.

You can also find them in iBooks.

The trilogy about the Author, Louis S Mackenzie, and the adventures in his fantasy world of Alphabetania represent the beginning, the middle, and the end of Mackenzies long life as an author. Each book is an independent adventure story and it is NOT essential to read the trilogy in chronological sequence in order to understand the stories.

They idyllic life of Alphabetania is starting to fracture. Secret letters and accusations are causing the spread of unrest. The Alphabetanians are beginning to turn against one another and soon blood is shed for the first time in a completely innocent world. Will people be able to handle the truth concerning the power that is hidden in the signs?

In another reality, the Author Louis S Mackenzie is lost in thought. While the world crumbles around him, he follows the struggle in Alphabetania with an eagle eye - for their struggle is his struggle. In his hands he holds a pen.

Signed is the first book in the 'Defenders of the Sign' trilogy - an exciting and unique series of stories about love, faithfulness, treachery and courage.

Signed tells the story of two seventeen-year-old boys who are fighting against lies and betrayal and the destructive forces in their world. In one reality they are trying to resolve conflicts with a sword, but in the other with a pen. That world is set in Scotland during the Second World War.

The plot of this story takes place on many levels, each part with its own context. The quest for answers to the deep mysteries of life and the mystery of individual characters and symbols cause the worlds to interact.

When the young Iona turns his back on his own family and seals a blood pact with their arch enemy, his action has unexpected consequences for all the Iotanians.

The Great War has divide Alphabetania in two. The Defenders of the Sign now have their own territory, Betania, but the Iotanians also live within their borders. As long as the two peoples are enemies, there can never be peace in the land.

Sealed is the second book in the 'Defenders of the Sign' trilogy - a vivid portrayal of two families' costly attempts to forge peace, and a story of love that crosses national boundaries.

Prince Alega is only five years old when he is witness to the murder of his mother at the hands of the Iotanians. So it is not surprising that he is both terrified and very angry when an Iotanian turns up in his own home. But Iona has been cast out of his own family and has turned to his enemy for mercy.

This bold action has important consequences - it leads to a blood pact between brothers whose loyalty to each other will know no boundaries.

In the meantime, Rhozeta, the younger sister of Iona lives in Iotania. She is terrified that her father will lead the Iotanians into a war against the Defenders of the Sign. Many years of conflict follow.

In another reality, Louis S Mackenzie is writing his books while he has his own domestic problems. His seventeen-year-old son is in trouble with the police. The realities of his life and the fantasy world are very different, but the problems are universal.

The action in Sealed takes place about 1500 years after the events of Signed, and as an adventure story it can be read independently of the other volumes in the Defenders of the Sign trilogy.

Epsilon is the heir to the throne of Betania, but he does not want to be king! How will he save his people from the enemy in the north, an enemy who hates the Defenders of the Sign and everything they believe most deeply? Epsilon and the Defenders of the Sign have put their trust in the Diatekt, an ancient artefact. But can the Diatekt prevent war, and can it reveal the truth about the Author and his relationship with the people of Alphabetania?

In another reality, the ageing writer Louis S Mackenzie is deep in thought. He has to finish his life's work, but he struggles with that. The conflicts in the Alphabetania has built up over a long time, and Louis cannot see clearly how it all should end.

Delivered is the final book in the 'Defenders of the Sign' trilogy - an exciting and unique story of love, betrayal, faith and courage. Each of the books in the trilogy describes an independent adventure.

In Betania, the Defenders of the Sign believe that a powerful artefact, the Diatekt, can reveal the origins of life and also resolve their conflict with the powerful Alphanian enemy in the north. But finding the Diatekt turns out to be a bigger challenge than they had expected.

Everything looks bleak for young Epsilon and his friends. Although some would argue that Epsilon has a knack for getting in trouble, he also has a quality that should prove to be valuable: he is fearlessly devoted to his people!

Louis Mackenzie has long looked forward to the conclusion of his life's work. But when the time comes, he just cannot conclude it. Fortunately help is at hand from several sources, including his grandson Edward, himself a lifelong avid follower of the adventures of the Defenders of the Sign!

"I hope you, the reader, find the world of Alphabetania as exciting and thought provoking as the 'Author' how created it, and the 'Mediateor' who offers the English-speaking reader the chance to enter another reality. Enjoy!"

Alie Stibbe, translator of the English edition of 'Defenders of the Sign'

"... both a dense and widespread fantasy novel that constantly opens up new and surprising insights"

From review in Norwegian Hamar Arbeiderblad

"... a fine storytelling voice, surprising twists and turns and a promising continuation make the 'Defenders of the Sign' a rewarding series to read"

From review in Norwegian Fredrikstad Blad

(Born 1972) lives in Hamar with his wife and three children. He is a writer and graphic designer. Delivered is his fifth book.